If You’re Feeling Overwhelmed by “Contrast,” You Could be on the Verge of a Breakthrough

We are all in this together and I am very willing to take one for the team and admit that I’ve had that overwhelmed feeling very recently.  The contrast, as in circumstances that contrast with what we want, began to generate that feeling of “I give up.”  First, I need to be honest that the giving up idea is not natural for me, at all!  Even saying those words feels like, “Oh, hell no; I don’t do that.”

But, like everyone else, sometimes a conspiracy of events and what feels like very little progress in a particular situation, can lead to a sense of just wanting to say “Enough.”   I was definitely still feeling that after getting myself into a good vibe with some of my go-to rituals and then taking every inspired action I could think of.  Instead of feeling progress, I felt like there was no apparent path for resolving the contrast.  It seemed too difficult, too complicated, that there were too many unknowns.

Of course, feeling like we’ve done all we can do to improve a situation usually feels like the path forward and the only path toward improvement.  So, when we take the steps we think we should take and it still feels like this is going nowhere it can feel not only overwhelming but as if we are stuck.  And, you probably know I’ve recently written a book called You’re Not Stuck, which makes a very good case for the fact that we are never really stuck.  And, I know that to be true.

In You’re Not Stuck I suggest that:

that you are thinking many of the same thoughts, believing the

same beliefs and repeating the same actions over and over.

So just a slight shift in a different direction, something as simple as thinking a new thought, challenging an old belief, or taking an action that is new and different, can often immediately set the changes in motion that will begin to create a new and. Improved reality.

Yet, when we feel we’ve done every single thing that we can possibly do to create a solution to our contrasting situation, finding that new thought or any action that is inspired and creative no longer feels like an option that’s available. In this case, I’m not referring to the garden variety contrast in the range of “Oh, that was annoying.”  This is more of the “I cannot do this any more contrast.  I’ve had it.  I just want to quit.” 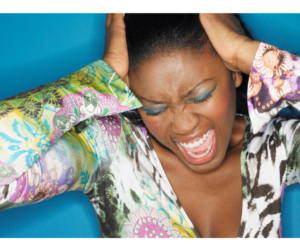 When I had this feeling very recently I actually found myself pretty quickly shifting to a much better perspective, once I reminded myself of the times when either me or one of my coaching clients have been in this very situation and the feeling of complete overwhelm was actually a catalyst for moving through and beyond the contrast. In each case that I could recall there was some kind of forced time-out.  Something literally forced me or one of my clients to let go of the struggle because some intervening events made it impossible to keep up the frenetic effort to solve the problem.

I’m not suggesting here that you need to create or have a dramatic intervening event to create that forced time-out.  We can make it easier on ourselves.  I will admit though that sometimes the intervening events that forced me to just stop the madness were pretty dramatic.  And, I know that was true for some of my clients.  Sometimes it can take almost a thump over the head to stop that “dog with a bone,” momentum. 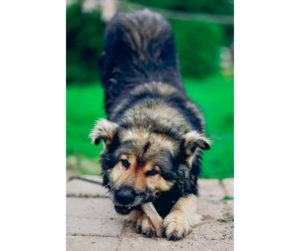 One of my newer clients related to me that she previously had been in a very dark place and was feeling incredible financial pressure and somehow sustained a concussion.  While she was recovering, events conspired to create a sale of real estate that had been stagnant and she suddenly had just the funds she needed.

I’ve mentioned before that in a state of complete overwhelm I flipped over my dog and also got a concussion and a broken elbow requiring surgery.  While I was recovering, all of the moving pieces of the situation that was completely overwhelming moved forward without any action on my part.

By the way, please don’t feel that sustaining a concussion is the only way to let go of your constant focus on your contrast that was resulting in the situation remaining difficult and overwhelming.  We can just decide to let it go for a bit and focus on other things.  That’s a very good option!

In my case recently, I was frenetically checking off every item I could think of to move forward to solve the contrast and realized that my right hand was having crazy pain and the feeling of small needles sticking in my palm.  It definitely seemed like getting off of the computer and phone was called for.  It was so obvious.  As soon as I made that decision, took a break, meditated, took a nap, decided I was done with the issue for the near future, I began to feel some sense of relief that actually is a very good sign that the solution is on its way.

I realized that the forced time-out was actually assistance from the Universe.  My hand stopped having those symptoms within a day and I was easily able to use my computer.  But, it still didn’t feel like it would be following my highest excitement to jump back into trying to solve that issue that I was finding overwhelming.  So there was the forced time-out and then came my own decision to take a time-out on the issue.  Sometimes we need to draw a line in the sand that we are letting go, at least until it feels like there is an inspired action that would be helpful.  When it’s what we’ve defined as a “big problem,” (never a great idea by the way), we need to focus on how we’ve been thinking about it.  We need to feel the emotions we’ve been feeling, which can kind of feel like diving into the abyss.  I’m not a big fan of that but I know that we can’t move forward from the murky vibration that was generated by the unhelpful thoughts we’ve been thinking without an awareness of our thoughts and emotions.  Once we tune in and realize that we could think differently about the situation, or decide to no longer allow it to run the show in our head, we’ve moved into a place where we can receive the solution and positive inspiration that we need.

This can’t be a half-hearted “I’ll try not to worry about that.”  It’s so much more effective if it’s more of a decision, a pact with yourself to let it go for now.  If any nagging thoughts pop up, you can choose to say, “I’ve decided I’m not focusing on that now.”  Once we reflect on how we’ve REALLY BEEN THINKING ABOUT IT, we can find the resolve to stop the madness and let the Universe work its magic.

My vibration shifted fairly quickly when I let myself off the hook.  The “issue” is not resolved YET but I now am in that zone where I know that it will be.  I know that I’m back on the pathway to all of the manifestations I want.  And, I received inspired ideas for other things I’m working on in my life when the “issue” was no longer constant background noise.  Now I know that the solutions are on their way to me because I’m receptive to them.  Other things have popped in a good way.  There have been some seriously surprising developments in other things in my life that are important.  They didn’t stand a chance as long as I was holding onto the “issue” with a “death grip.”  And, now I’m actually looking forward to seeing the interesting way in which a solution appears.  I’m definitely back on my pathway toward the manifestation I desire.

It’s happened time and time again and sometimes we just need something obvious to intervene and get ourselves off of the treadmill we are feeling must lead to the solution. Getting off of my computer when I had lots of work to do and progress to make did not immediately feel like a great idea but then I remembered that familiar pattern of how walking away from that overwhelming thing that is taking up so much of my valuable headspace is the perfect move toward getting back into alignment and letting the Universe handle the problem.

We need to remember that if we’re not interfering with our solution with a murky vibration the Universe is already naturally taking care of the issues that seem to be holding us back.

I hope that this may help you to move more quickly to a sense of relief when you feel you are near your breaking point over what seems complicated and overwhelming.  Remind yourself that the big contrast is often the beginning of the solution.  It’s a friendly Universe and things are meant to be much easier than we often allow them to be.  And, there’s often a much bigger bounce and shift into faster momentum when we’ve experienced the contrast and moved beyond it deliberately.  That’s what being a deliberate creator is all about.

The next time you are feeling like you just want to give up or throw in the towel, remind yourself that you are only a vibration away from your breakthrough.  And, it’s going to be even better than it would have been before you let go for a bit and let the Universe take the lead.

If you’d like any help with finding a way to shift your perspective on any contrast in your life you can reach me at susan@howtoallow.net