I’ve been excited about writing this post for quite a while as not only do I think it’s important, but it took me quite some time to come up with the answer to this apparent quandary in deliberate creation.  I say “apparent quandary” because, of course, the answer is pretty simple, when you cut through it all, but we do seem to make working on our “issues” more complicated than they need to be at times.

I read recently a post by the very wise and talented coach, Laura Gevanter, of Present Tense Coaching, whom I’ve had the pleasure of being interviewed by on her radio show.   Our interview was on the subject of Allowing our Well-being and my book, “How to Allow.”  Laura agreed that the allowing part of the equation is the place where she sees most of her clients get hung up.  Yet we broke new ground on Allowing and talked about all of the ways it can work fabulously!

The recent post by Laura quoting author Brian Tracy,  which has given me pause, however, follows:

That quotation struck me as full of wisdom and great truth.  It reminded me of one of the foundations of “How to Allow,” where I suggest that you don’t just decide that you’re going to “try to” think the best thoughts that you can whenever you can, but that you decide that you “will” think the best thoughts you’re capable of thinking on any subject whenever you become aware of negative emotion.  I pointed out that saying, “I’m going to try to lose that ten pounds,” is significantly different from saying, “I’m going to lose ten pounds.”  There is a huge vibrational difference in those two statements, in my view.

What struck me about the Brian Tracy quotation about the turning point where one decides they will not live like this anymore, is that some sort of stand does need to be taken if we are to expect positive change.   To continue to repeat the same patterns of thought or action and expect to get different results has been characterized as the definition of insanity by no one less than Albert Einstein.

I believe his exact statement was that “Insanity is doing the same thing over and over again and expecting different results.”  He similarly said, “We cannot solve our problems with the same thinking we used when we created them.”  He also said (that’s why he’s called a genius) “Any intelligent fool can make things bigger and more complex .  .  . It takes a touch of genius – and a lot of courage to move in the opposite direction.”

What gave me pause about this turning point decision, this drawing of a line in the sand that says, “No more living like this!” is that on it’s surface it’s inconsistent with the primary foundation of learning to Allow your Well-Being, that is, making peace with where you are right now.  In fact, Abraham has said that:

“There is nothing more conducive to the building or maintaining of momentum than making peace with where you are.”  Abraham as quoted in “How to Allow,” page 40

So where is the issue?  Is there a contradiction between the two pearls of wisdom?

Initially, I thought that it might be impossible to take that strong stand that I will no longer live like this while still making peace with where I am.  But, after meditating, when I asked for guidance, I received the wisdom that brought it together for me.  That decision that I will no longer live like this, the turning point, can be that I will no longer get blown off the road, thrown into the bushes, or catapulted out of my vortex, when things happen which are not in line with my desires, which aren’t the way I think things should be.  I’m just not going to allow myself to wallow for more than a few seconds (gotta give myself time to react) in feelings of desperation, depression, futility, powerlessness, hurt, anger, devastation . . . or whatever fun emotions come forth when I run into something that really, really doesn’t please me.

And that, I think, could fit well with Brian Tracy’s wise quotation about the turning point decision.  You will no longer live like this, that is, let yourself get knocked off your horse, but you can still make peace with where you are at the time.  And it’s much easier to make that peace with where you are when you haven’t allowed yourself to get into those lower end emotions for any great length of time. 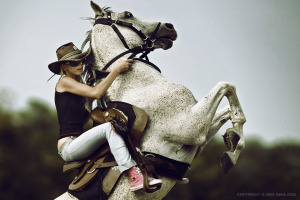 So, how would that work   in practical terms?  Because I’m writing this on Valentine’s Day, and I’ve been reading lots of material on relationship issues, perhaps that would be a good example of reconciling these two approaches.  Perhaps your significant other says something that lays you low.  It’s not respectful, it’s uncalled for and hurtful and you can hardly believe the words came out of his or her mouth.  After a brief response that lets them know that you won’t tolerate it, rather than sinking into being wounded and beginning to think about every fault you’ve ever uncovered in your significant other, you decide to let it go.  You focus on something else because you’re not going to let some ridiculous behavior knock you out of your vortex and into the bushes.  After a little more time, you might be able to go into a bit of memory or fantasy where you remind yourself of all of their good qualities, which are many.  And, that’s where you leave it.  It’s much more than likely that you’ve changed your point of attraction by deciding to make peace with where you are, by reminding yourself of what’s working in your relationship.  It’s not perfect, you expect improvement, but there are lots of things working for you in this relationship and in your life.  If you have to go a bit more general, you can think about how you now understand how the laws of the Universe work, and you’re surely going to continue to have improvement as you’re now aware of what you’re doing.  You are a deliberate creator.

And, as a skilled deliberate creator you can make peace with where you are while also deciding that you will no longer live like this, that is, letting things that really don’t please you knock you off your game.  It’s your game, you’re in charge and there’s no going backwards.  You’re becoming more and more of Who You Really Are each day and you, just you, are in charge of your vibration.  Now that’s a decision that really resonates with me.

I’d love to hear how others work around this issue.  What decisions have you made that have changed the way things are showing up in your life?